The True Knowledge, wisdom and techniques of Thoth Hermes Trismegistus were so wondrous that he was revered by ancient Romans as the god Mercury, messenger of the gods and by ancient Greeks as Hermes, the god of the healing arts. 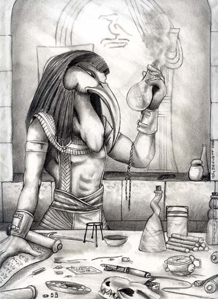 Thoth was known in ancient China as Fu Xi, creator of the I Ching and in India as Vamana, the last Vimana pilot. In his travels around the world, he collected certain pre Great Flood artifacts and documents which he used to resurrect the wisdom and techniques of the Ancient Ones.

The wisdom and techniques of Thoth Hermes Trismegistus enabled Egypt to become the center of civilization. But, his amazing wisdom of life and vast amount of historical information were modified, diluted and woven into the fictional stories of the Bible. Thoth was given the name of Enoch by Sumerian Hebrews and he is the only man whom the Bible says walked with God.

Thoth Hermes Trismegistus founded the legendary Right Eye and Left Eye of Horus Mystery Schools. They were called Mystery Schools because the subjects taught were never discussed outside of a Mystery School and violators were executed.

Thoth used certain of his pre-Great Flood artifacts and documents to build the great pyramids using the energies of Unconditional Love to levitate the great stones, or Teraphim, into position. Long ago, such artifacts were used to teach advanced seekers of the meaning of life in the Eye of Horus Mystery Schools.

Abraham and the Sumerians stored the pre Great Flood artifacts, documents and other priceless treasures of Thoth Hermes Trismegistus in their stronghold city of Megiddo.

In our Weekly Love Fests and monthly Love Sessions, Ga Ra and Za Ra, release additional information from their ancient ben Panther family records, including how Thoth’s treasures became stored in the biblical Ark of the Covenant as well as how part of the Ark’s priceless treasures were hidden in upstate New York, Scotland and as explained fully in a Love Session on January 15, 2015, also in Ethiopia, where a thousand years ago Quetzalcoatl gave Thoth Hermes Trismegistus’ levitation rod of gold to a monastery’s Enlightened abbot.