The Great Flood of 3114 BCE is one of two events in human history that are recorded in the religious scriptures and legends of every group of people upon planet earth. This event is recorded in the western world’s Bible as the fictional story of No Ah’s Ark. 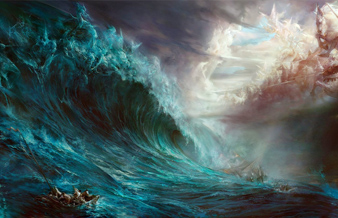 The truth behind the Bible’s collection of fictional stories was supposed to be verbally explained by rabbis. But the rabbis of 2,000 years ago focused on earthly pleasures and people today have been deprived of the truth.

And so it is from the ben Panther’s secret family records, we at Love Energy Centers now share the truth of this event with you. The story of how a few were saved from the Great Flood in twos within a wooden container is common among the Great Flood historical accounts recorded in today’s “myths and legends”.

The truth is that the few who survived the Great Flood were those Enlightened Ones who had balanced the energies of Unconditional Love and Unceasing Light in the brain of their temporary physical body and the Mind of their permanent 4th dimensional Emotional Body.

Now there was nobody named Noah who built an immense ark. The term No Ah describes the pre Great Flood time when wireless technological energies filled the air with the positive ions of Light-Light-Love energies. This was the time of No Ah Energy.

Ah is an ancient word that is close to the sacred sound that God sings upon creating the universes of a creation and while nourishing a creation of universes for an eternity. And so it is that over 5,000 years ago wireless technological energies filled the air, like today, interfering with God’s energies that naturally flow to planet earth from the sun.

This energetic pollution severely limits one’s connection to God’s natural energies of Unconditional Love and Unceasing Light that flow to us upon planet earth as high frequency energy waves of sunlight. However, as high frequency Unconditional Love Energies flow from the 10th dimensional Group Consciousness of the sun to us on planet earth, they collide with 3rd dimensional humanity’s lower frequency wireless technological energies.

As a result, the high frequency Unconditional Love Energies in sunlight have been greatly reduced in the last 20 years as seen in the irritated faces, angry actions and unhappy lives of people today and in the decrease of rainbows around the world.

And so it is today that most people are unaware that the rainbow. according to the Old Testament, was given to humanity by God, as a symbol, and as a measuring method, for humanity to know if and when they were breaking the Covenant.

Humanity has once again created the lower dimensional level wireless technological energies that kill rainbows and interfere with the Unconditional Love Energies that are manifested into 3rd and 4th dimensional existence by the sun to nourish humanity.

And so it is that we at Love Energy Centers have devoted our lives to bringing in the Love Energy, or the Ah, into our lives and the lives of those around us. It is the magnitude of our Love Energies as a group that enables us to consciously travel as a group through Tunnels of Love during Weekly Love Fests and consciously visit a distant location where there is no pain or suffering.