The Emerald Tablet was created by the famous Thoth Hermes Trismegistus thousands of years ago. Many copies were made during the last 1,400 years of the original text that appears on the surface of the Teraphim known as the Emerald Tablet. 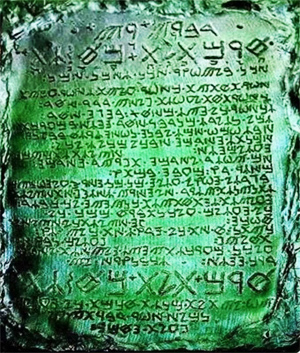 However, unknown to most people is the fact that only the original Emerald Tablet contained all of Thoth Hermes Trismegistus’ wisdom from which the spiritual art of alchemy was born and nurtured in ancient Egypt. Thoth bestowed his Emerald Tablet to the Eye of Horus Mystery School that he founded.

He taught certain Super Enlightened Mystery School teachers how to access the full wisdom of the Emerald Tablet he stored within that wondrous Teraphim. Ga Ra and Za Ra used ancient ben Panther family records to create their Attain Enlightenment recording where they explain some of Thoth’s vast amount of wisdom contained within his Emerald Tablet.

Sumerian Hebrews invaded Egypt thousand of years ago and as recorded in the Old Testament when they returned home, they took with them the portable treasures of Egypt. In this way, the Emerald Tablet and all of Thoth Hermes Trismegistus’ priceless artifacts and documents were taken from Egypt and stored in the Sumerian Hebrew stronghold of Megiddo.

In the 7th century, evil vicious Islamic religious zealots from Arabia invaded Egypt and stole Thoth Moses III’s copy of the Emerald Tablet. Then, after deliberately burning the Library of Alexandria to destroy historical and scientific documents that conflicted with the Koran, these evil ones sent the copy of the Emerald Table, and Egypt’s portable wealth, to Mecca.

However, the original Emerald Tablet remained in the Ark of the Covenant and a thousand years ago, the Super Enlightened One called Quetzalcoatl found the Ark of the Covenant. Later, he had his Desposni relatives in the Knights Templar moved America’s and Europe’s portions of the Ark to France, and then to Scotland in the 14th century. Quetzalcoatl, with his wife White Buffalo Calf Woman took Africa’s portion of the Ark to Ethiopia.

And so it is today, that some spiritual adepts say the original Emerald Tablet is with Thoth’s golden rod of levitation in Ethiopia, while others say it is in Scotland and a growing number of adepts say it is buried in upstate New York’s Egypt Valley. Here are two translations of the Emerald Tablet, one by Newton and one by a 12th century Desposni Knights Templar.

A translation by Isaac Newton found among his alchemical papers that are currently housed in King’s College Library, Cambridge University.

1) Tis true without lying, certain & most true.
2) That which is below is like that which is above & that which is above is like that which is below to do the miracles of one only thing
3) And as all things have been & arose from one by the mediation of one: so all things have their birth from this one thing by adaptation.
4) The Sun is its father, the moon its mother, the wind hath carried it in its belly, the earth is its nurse.
5) The father of all perfection in the whole world is here.
6) Its force or power is entire if it be converted into earth.
7) Separate thou the earth from the fire, the subtle from the gross sweetly with great industry.
8) It ascends from the earth to the heaven & again it descends to the earth & receives the force of things superior & inferior.
9) By this means you shall have the glory of the whole world
10) & thereby all obscurity shall fly from you.
11) Its force is above all force. For it vanquishes every subtle thing & penetrates every solid thing.
12) So was the world created.
13) From this are & do come admirable adaptations whereof the means (or process) is here in this.
Hence I am called Hermes Trismegistus, having the three parts of the philosophy of the whole world
14) That which I have said of the operation of the Sun is accomplished & ended.

When I entered into the cave, I received the tablet zaradi, which was inscribed, from between the hands of Hermes, in which I discovered these words:

1) True, without falsehood, certain, most certain.
2) What is above is like what is below, and what is below is like that which is above. To make the miracle of the one thing.
3) And as all things were made from contemplation of one, so all things were born from one adaptation.
4) Its father is the Sun, its mother is the Moon.
5) The wind carried it in its womb, the earth breast fed it.
6) It is the father of all ‘works of wonder’ (Telesmi) in the world.
6a) Its power is complete (integra).
7) If cast to (turned towards- versa fuerit) earth,
7a) it will separate earth from fire, the subtle from the gross.
8) With great capacity it ascends from earth to heaven. Again it descends to earth, and takes back the power of the above and the below.
9) Thus you will receive the glory of the distinctiveness of the world. All obscurity will flee from you.
10) This is the whole most strong strength of all strength, for it overcomes all subtle things, and penetrates all solid things.
11) Thus was the world created.
12) From this comes marvellous adaptations of which this is the procedure.
13) Therefore I am called Hermes, because I have three parts of the wisdom of the whole world.
14) And complete is what I had to say about the work of the Sun.